On the July 11 episode of the GTFOutcast, Beau and Taylor discuss the obstacles they face before setting off on their travels and also how to get rid of stuff they don’t need in order to, either raise money for their trip, or to just travel light.

0:46 – Taylor talks about the obstacles in getting started with his travel plans. Selling off the stuff at home to raise funds for his RV trip isn’t working out as easy as he thought it would be.

4:35 – Beau quotes Billy Hoffman, who said the hardest thing to do as an entrepreneur is splitting time to do everything you want to do, and how it parallels with life and travel.

8:17 – Beau talks about the obstacles he faced when beginning his travels. Like finding a good place to stay.

10:44 – Taylor agrees with Beau that it’s great to seek where the locals hang out and not where all the tourists flock. Not only does this help in bagging better deals, but it also guarantees a true local experience.

12:34 – Beau asks Taylor about luggage bags. Taylor agrees with Beau that roller bags aren’t the best for the kind of travel backpackers enjoy.

19:38 – Taylor asks Beau how he went about selling all of his stuff. Beau did a combination of Craigslist, a yard sale for 3 days and gave some things away to his friends when time ran short.

22:37 – Taylor ends the show talking about the things we have an emotional attachment to and how to let go of them.

On this episode, Beau and Taylor talk about why they travel and what inspired them to do so. From boredom at work, to the urge for adventure and seeking something new, the duo offers listeners advice on how to take that first step in packing their bags.

1:05 – Beau asks Taylor how his coffee is. Which leads to the question of how many times Taylor has been to Hawaii and what he thinks of the Hawaii islands.

2:40 – The conversation drifts in to how some of the best food both Beau and Taylor have eaten on their travels has been the local street food.

3:54 – Beau launches in to the main topic of why we travel and Taylor talks about his inspiration to travel. Believe it or not, Taylor’s long term goal is to change the way we teach children.

6:38 – Beau talks about how he traveled around the world for a three whole months. But that wasn’t enough, and that trip inspired Beau to think about traveling a lot more.

9:16 – Both of them agree that long term travel really helps you think better as you have the time to do so.

10:10 – Taylor talks about how productive his mind is when he goes hiking. Some of the best thinking both of them have done is when they had the time to travel at ease and not really have to worry about the everyday pressures of life.

13:10 – Taylor asks Beau about what makes him want to get up and do what you do. For Taylor, waking up in a hotel room in a new foreign country is what keeps excites him to keep traveling. 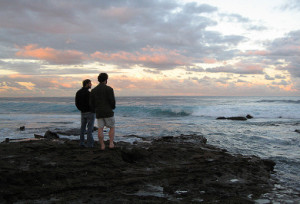 20:15 – Beau asks Taylor what was it that initial inspired him to go from a stable life to a more adventurous one and take a chance doing something that most would consider an “insecure” job.

24:15 – Beau talks about his epiphany after the 3-month long world tour and how the soul-searching eventually led to the admission of unhappiness Beau got out of work. Beau advices others to take that one small step to travel and believes that will set the ball rolling.

28:56 – Talyor admits he has a tough time planning for the future. At the same time, he believes it’s okay if younger people didn’t think too much into the future as plans and ambitions may change as years go by.

32:54 – Beau wraps up the episode by stating people’s paths may change and they need to overcome their thresholds.

After years of corporate work life, friends Beau Woods and Taylor Banks welcome everybody to the first ever episode of the GTFO podcast — or the GTFOutcast as they like to call it!

0:25 – Beau asks Taylor about his plans after buying an RV.

1:20 – Taylor gives his introduction and all the low down on the GTFO podcast and why both of them wanted to do this series of podcasts.

3:34 – Beau gives his introduction and how he left his job in information security to travel for more than 18 months.

7:01 – Taylor stresses on how, now that both of them have gained enough work experience, it gives them the freedom to take up work they only want to do and not work because they have to.

10:19 – Taylor reminisces of a trip to Costa Rica, which was essentially a business trip, but it brought about a mental change in the purpose of what he was doing with his life.

12:40 – Beau adds to that by talking about the change in values travel brought about. How money was no longer the objective, and how he hopes this podcast helps others in enabling others to achieve the same.

16:59 – Why should you subscribe to the GTFO podcasts? Well, besides being awesome, Beau and Taylor lists out a couple of other reasons: